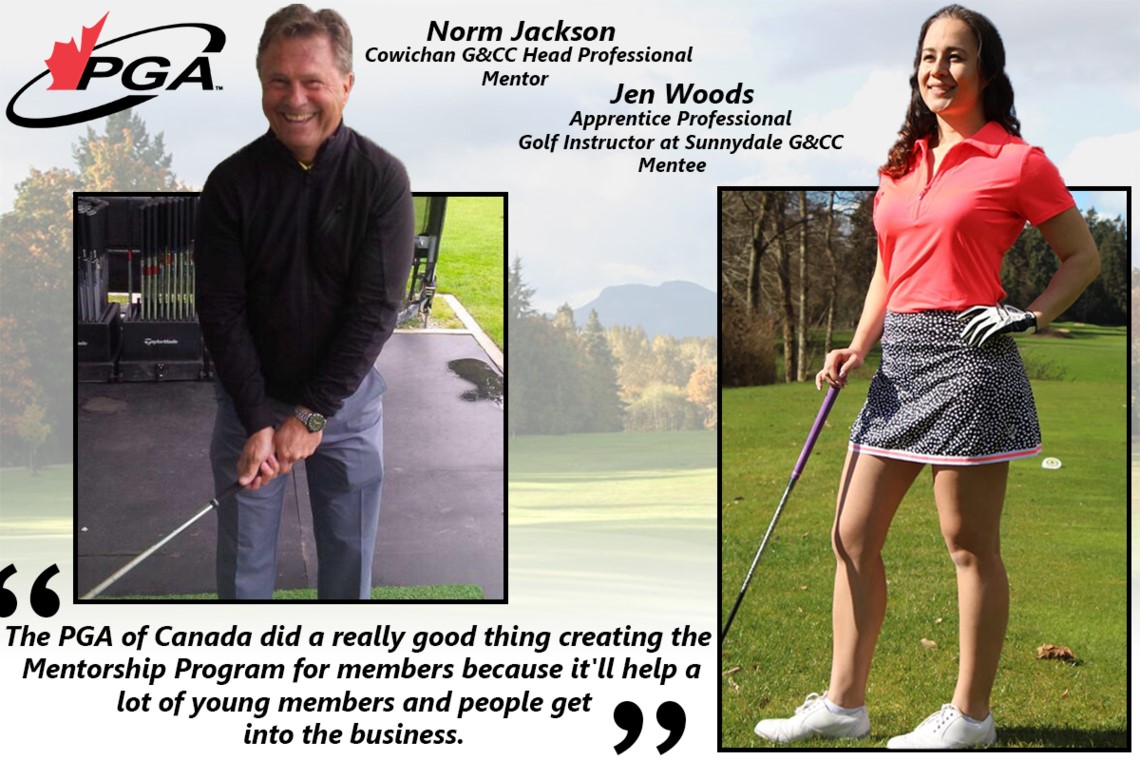 The PGA of Canada is looking for mentors for this upcoming season! If you are interested, click here to register

Prior to the duo pairing up, Woods was finding success coaching, but knew having someone with experience to share their knowledge would be invaluable to her career.

Woods was searching for someone to be on her side who would be able to be honest and tell her whether she was on the right path, someone to give knowledge that only comes with years of experience in the golf world. That need for wisdom led Woods to Jackson.

“Once I connected with him, it was really quick for me to see that he wanted to see me succeed,” says Woods, who is currently on maternity leave from her teaching role at Sunnydale Golf & Country Club. “He genuinely expressed how much he wanted to help me build my business.”

Jackson has 52 years of experience under his belt with the PGA of Canada and is now the Head Professional at Cowichan Golf Club in Duncan, BC. Reflecting on his career, Jackson says, “you realize how lucky you were to have such influential people in your life that helped you along the way, and they have been a huge part of why there's been some success in my career”.

Jackson says he has unofficially been mentoring younger players for years, but when Woods approached him asking for his guidance, he jumped at the opportunity.

“You can't keep it, you want to make sure that you give your knowledge away to those who are coming up in the business behind you,” says Jackson.

Woods says that the relationship Jackson and her have developed has been critical to her success in the early years of her career. Woods and Jackson both claim that open communication has been key to their mentorship success.

“It's fueled by conversation; you are in a position to join forces with someone for a period of time and really tap into their experiences and try to learn as much as you can in such a short period,” says Woods.

Jackson agreed that for a mentorship relationship to be successful, both individuals need to be comfortable.

“Choosing a mentor that you can relate with is a huge part of the mentorship program. Someone that you feel comfortable being vulnerable with is key for success and to create a relationship for feedback to be fully received,” says Jackson.

Both professionals agree that the mentorship program is not only for individuals facing conflict, it is valuable for everybody in the industry.

Jackson echoed Woods' thoughts on this. “Even if it's going well in your life, you still have to be able to look in the mirror every day and say, ‘where could I improve?’”.

In 2019, the PGA of Canada re-launched the Mentorship Program as a way to provide more support for members. Mentees choose from one of four streams that best aligns with their goals. PGA of Canada Members can find more information on the program here.

“The PGA of Canada did a really good thing by creating this opportunity for members because I feel like it's going to help a lot of the younger members and even just potential people that are trying to get into the business,” says Woods.

Jackson put it simply by saying, “if you're not doing it, you're missing a huge, positive experience.”