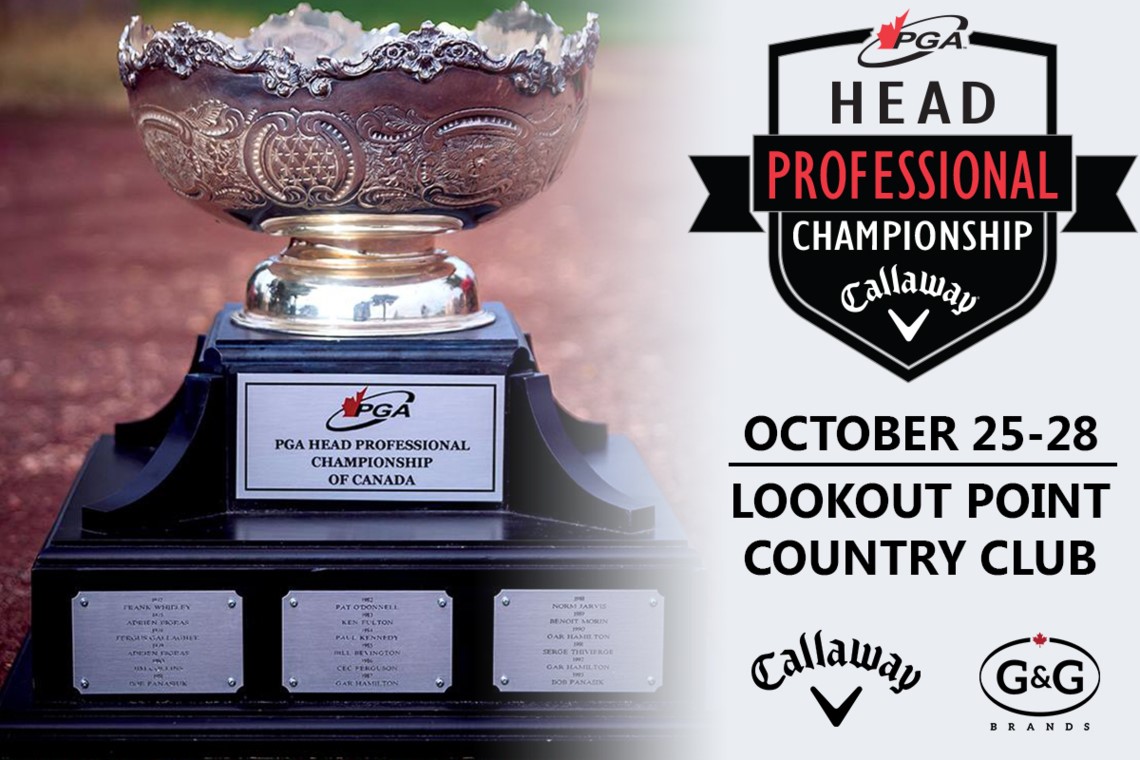 Thanks to BetRegal, the Official Sports Gaming Partner of the PGA of Canada, we’re giving you an opportunity to get more involved with the action than ever before. Simply head to this BetRegal link, and select your pro. The pro that wins the event will receive $10 for each vote cast in their name, half of which will go directly go to supporting their club.

In addition, the pro that receives the most support, or unique ‘votes’, will also be awarded the banked funds that they have earned. So head here to support your pro!

Anticipation is at an all-time high as two-years have passed since Gord Burns captured the last playing of this event in 2019 at Wigwam Golf Resort in Litchfield Park, Arizona. A victory would taste even sweeter this week, as the event heads back to Canadian soil for the first time since 2003 when Brett Burgeson captured a win in Quebec.

The players are in for quite the treat at Lookout Point Country Club. The venue is located centrally on a spectacular piece of property on the Niagara Peninsula and is surrounded by mature trees at the top of the Niagara Escarpment. Just 10-miles away from the world-famous Niagara Falls, its clubhouse offers panoramic views of the surrounding terrain and distant Niagara Falls skyline.

Tipping out at 6702 yards, the par-72 course is consistently rated within the top-100 courses in Canada by SCOREGolf. This year’s Head Professional Championship of Canada comes just months before the club celebrates its centennial season, as the Walter Travis designed course first welcomed golfers in June of 1922.

Lookout Point Country Club most recently hosted PGA of Canada professionals in 2013 when Jim Rutledge claimed his third of six PGA of Canada Senior Championships in a playoff over Rod Spittle at 7-under par. The club also hosted the inaugural RBC PGA Scramble National Championship in 2016.

The PGA Head Professional Championship of Canada presented by Callaway Golf has a list of champions that includes some of the most well-respected golf professionals in the country. The full list of past champions can be found here.

Without further ado, here are just a few players to keep your eyes on heading into the event:

The former Canadian Tour member from 1999-2003 heads into the tournament looking to become the first back-to-back winner of this event since Danny King in 2005 and 2006. Burns certainly has the game for it, which he proved in 2019 when he was named the PGA of Ontario Player of the Year and won the PGA Head Pro Championship of Canada presented by Callaway Golf at Wigwam, shooting 62-65-68 to win by 7 strokes.

After spending nearly eight years as the Head Professional at Fairmont Chateau Whistler, growing the club’s membership by nearly 350% and being awarded the PGA of BC’s Dick Munn award as Golf Professional of the Year in 2020, O’Rouke was named the club’s Director of Golf this past spring. He also has the game to match his management skills, claiming the PGA of BC’s Club Professional Championship last month, shooting 2-under par at the 36-hole event.

It would only be fair to follow O’Rouke up with the runner-up from this year’s PGA of BC Club Pro Championship. Zibrik, who is highly active within the British Columbia golf community, having served on the PGA of BC’s Board of Directors and as past Vice-President, has managed to keep his game sharp while managing a full plate as Director of Golf at Point Grey Golf and Country Club. Zibrik won the PGA of BC’s Club Pro Championship in 2016 and was named the association’s Golf Professional of the Year in 2019.

Chris Barber is synonymous with The Landings Golf Course and Teaching Center in Kingston, Ontario, where he is now the Executive Golf Professional and General Manager after 20 years of working at the club in various roles. Despite playing a little less golf the past two years, as he's been growing the course’s business and spending as much time as possible with his family, the PGA of Ottawa Zone member still has game, which he proved this spring when he won the PGA of Ottawa’s Zone Spring Open in a playoff after firing a 2-under par 70.

Roger Beale is another former champion to make this list, having claimed the Head Professional Championship of Canada presented by Callaway Golf in 2011 in Florida, firing 14-under through 54 holes to win by two strokes. Since then, when he served as the Director of Golf at Royal Westmoreland in Barbados (and coached the Barbados National Golf Team as well), Beale moved to the Marshes Golf Club in Ottawa, Ontario, this past winter where he has assumed the role of Head Golf Professional.

Like at all of our National Championships, there are multiple ways for players to win big outside of the event itself.

Our partners at Focus Golf Target will be setting up one of their driving range targets on a hole during the practice round, where each player will have three attempts to land a shot into the target. The player with the most made shots at the end of the day will walk away with $300.

Golf Away Tours will be supporting the player reception, which begins on Monday following the practice round, and LivRelief will be giving out free full-sized bottles of their industry leading pain relief cream throughout the week.

To see the full field and to track the leaderboard throughout the week, click here